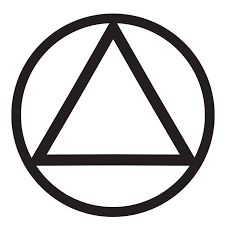 A triangle circle symbol is known as a Thaumaturgic Triangle. This symbol was a part of the Paranormal Activity movie.

The coven in the film utilized it to call and control a demon at the same time.

Triangle with a circle inside mean?

What does the triangle with a circle inside mean? The characters Katie and Micah are the protagonists of the film “Paranormal Activity.”

They placed cameras in various locations throughout the spooky house.

True, they live in a haunted mansion, but the truth is far more horrible than they could have imagined. The film’s suspense and intriguing narrative prompted sequels and prequels.

Katie’s grandmother forged a contract with a coven of witches, according to the film’s backstory.

She consented to let a demon take the soul of her eldest son in exchange for wealth and power. In “Paranormal Activity 3,” a triangular symbol with a circle inside made its appearance.

It signifies the demon who has snatched the soul of Toby, the firstborn son.

That triangle circle symbol name is the Thaumaturgic Triangle once more. This emblem is used by witches to call and control demons. This sign can also be seen in the sequels of Paranormal Activity.

Other than the Paranormal Activity movie, this kind of symbol is in The Harry Potter series movies, especially the Deathly Hallows part.

All Symbols that can be used for triangle circle:


What is the triangle Harry Potter symbol?

Harry Potter is a simple franchise with few symbols; yet, there is one that is prominently displayed.

It appears to be significant because it appears in several places, including Dumbledore’s signature as a replacement for the letter “A” and on Xeno Lovegood’s necklace.

If you’ve ever seen it, you’ve undoubtedly pondered what it means.

In the Deathly Hallows emblem, a triangle contains both a circle and a vertical line.

The Elder Wand, Resurrection Stone, and Cloak of Invisibility are three mythical artifacts from the “Harry Potter” series.

At the same time, the triangle depicts the Cloak of Invisibility.

The majority of the wizarding world dismissed the story as a legend, never giving it much thought.

The objects, on the other hand, were genuine.

Triangle with a line

The symbol for Air, one of the four conventional elements in alchemy, is a triangle with a line across it.

When a Wicca practitioner wants to call attention to wisdom or communication, he or she uses air in rituals. It can also represent the east or the breath (life in general).

It represents the soul, the east, life, wisdom, communication, and the air.