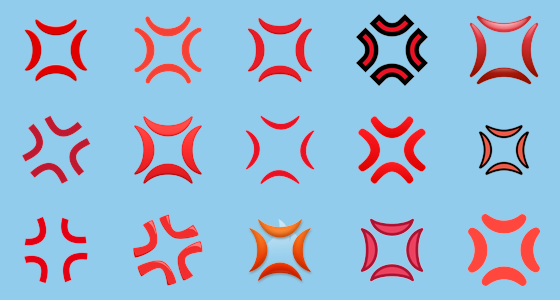 Anger, when uncontrolled or unneeded, does not serve us well on a personal or societal level. The same may be said of the emojis we construct. While writing about furious incidents or displaying emotions of anger through texts, there is always something underlying the feeling. Anger is often a fleeting emotion. And like every other emotion, there are many symbols for anger that describe a person’s feelings.

Symbols for Anger in Texts

Everyone feels and shows rage in their unique way. Some yell or say unpleasant things. When individuals feel angry online, they can’t physically express their rage, but that doesn’t mean it’s any less strong than, say, grabbing one’s hair.

Many individuals express their emotions with nasty words and furious emoticons. There are varieties of angry emojis in the emoji section. An angry emoticon can make or break any discussion. They should not be taken carelessly and must be handled with caution.

The Furious Face emoji😠, often known as the Angry emoji, depicts a face with frowning lips, angry eyes, and furrowed eyebrows. This emoji expresses a range of emotions, from dissatisfaction and grumpiness to passion, indignation, or even outrage. It may also be used to describe someone rough or cruel.

The pouting Face emoji 😡 is another symbol of anger. The Pouting Face emoji includes frowning lips, furious eyes, and wrinkled brows and is frightening to look at on most devices. This emoji is typically used to express a more serious and lethal sort of wraths, such as hatred or rage. Red is an intensely emotional color with a high level of visibility.

😤The two puffs of steam emerging from the nostrils are the face’s distinctive characteristic. This emoji represents great displeasure or annoyance. It is also linked to sentiments of rage or hatred. This emoji is also used by certain people to signify their commitment. In other circumstances, people send this to indicate their arrogance, stubbornness, or disdain for a certain issue or viewpoint.

All Symbols that can be used for anger

How To Use These Symbols

Fire – A Symbolism for Anger

The sign of fire is often connected with anger, and it is an excellent one. Fire is strong, hot, and powerful, and it can leave a burned trail of ruin in its wake. Passion, longing, reincarnation, destruction, hope, torment, and purification are all represented by the symbolism of fire. These symbols have appeared in literature, movies, and religious texts.

In color psychology, anger is also represented by an intense color – Red. It evokes the most intense feelings of any color. While cold hues like green and blue are often seen to be serene and relaxing, red is said to be the hottest and most contradicting. This blazing shade has the most opposed emotional connections of any color. Red is associated with passion and love, as well as strength and rage. The idiom “seeing red” is supposed to be based on the physical traits associated with rage. For example, facial and neck redness is generated by high blood pressure. Therefore, symbols for anger in textual language also include the symbol 💢.