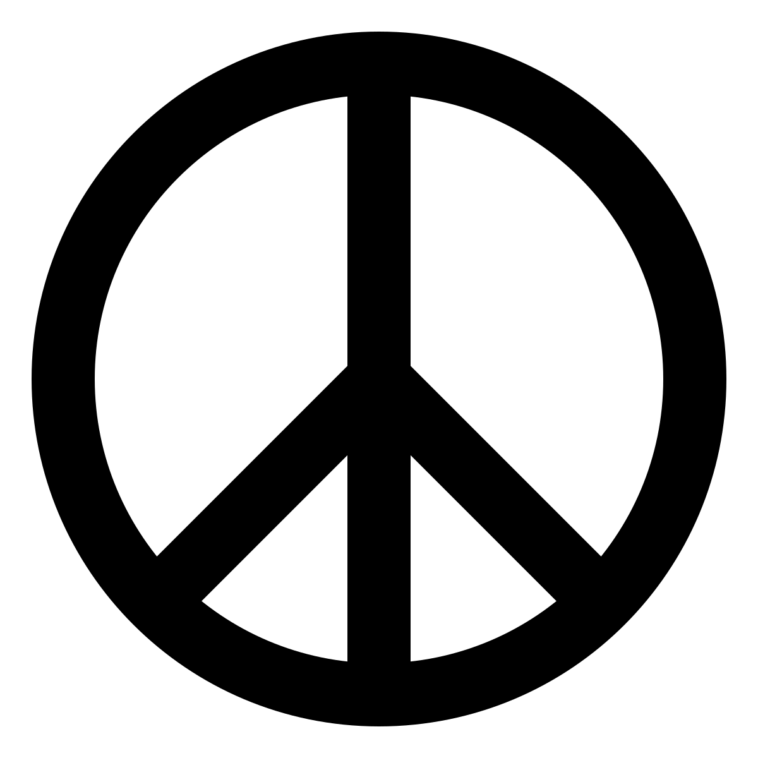 The dove appears as a symbol in the Bible in Genesis, which represents the flood story and the narrative of Noah’s Ark. The dove is connected with Jesus’ baptism in the New Testament. The dove with an olive branch in its mouth is considered to be a peace sign symbol and is related to the baptism of the members in various branches of Christianity. The Holy Spirit is said to have appeared to Jesus in the appearance of a white dove, hence, it is connected with baptism.

✌️ is recognized as a peace sign, but historically known as a Victory Hand. On one hand, two fingers form a V symbol. In British society, the opposite of this sign is considered an offensive gesture, equivalent to a bad language. Victory Hand was included in Emoji 1.0 in 2015 after it was accepted as part of Unicode 1.1 in 1993.

All Symbols that can be used for peace:

Today we recognize the peace sign symbol, but there is an interesting history behind it. The sign began as a symbol for the British anti-nuclear campaign. It has now become an international peace symbol and arguably the most extensively used protest emblem in the world.

Nuclear weapons were put in numerous European countries during the Cold War, in the 1950s. This sparked great public outrage. A committee for radical intervention against nuclear weapons (DAC) was created in the United Kingdom. Gandhi and his nonviolent approach to civil disobedience inspired the DAC. The organisation’s initial action was to arrange a march. The march was Britain’s first significant anti-nuclear weapons rally, a 52-mile march from London to Aldermaston, home to an A-bomb development facility.

The dove and olive branches were used metaphorically by early Christians and later became a secular peace sign. It was popularised by Pablo Picasso’s Dove lithograph during World War II. Gerald Holtom created the “peace sign” which is also known as “peace and love” in the 1950s. It was an emblem of the British Campaign for Nuclear Disarmament (CND).

The flag semaphore symbol for the letter D is made by the vertical line in the middle. The semaphore signal for the letter N is represented by the downward lines on each side. In a circle, the letters “N” and “D” stand for nuclear disarmament. Holtom also defined the sign as portraying sadness, with the middle lines creating a figure with hands questioning at its sides against a white Earth background. Holtom is believed to have considered employing a Christian cross but despised its link with the Crusades.