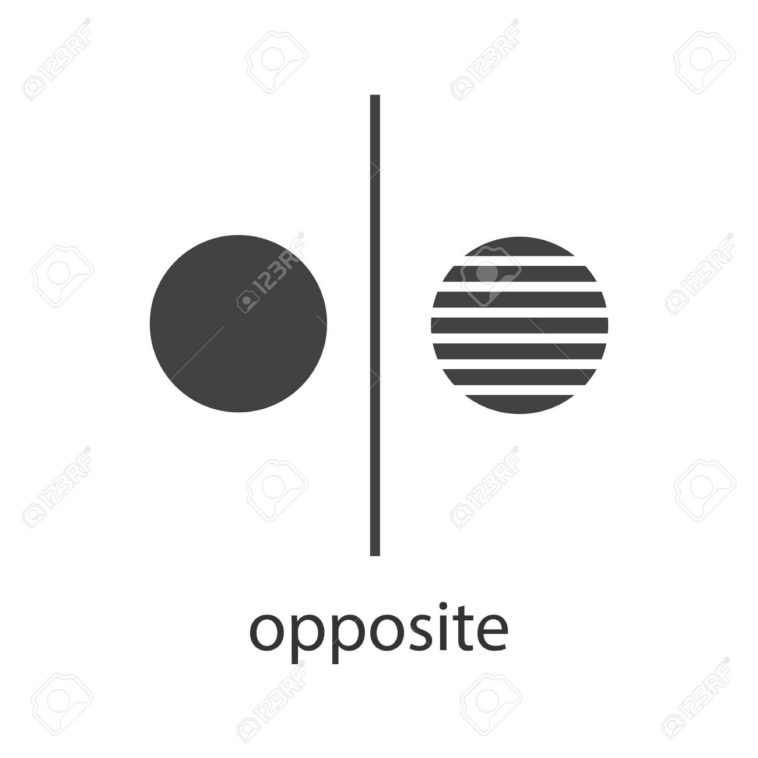 Symbols are visual representations of an idea or concept. The opposite of symbolic is non representative and non symbolic. However, the word opposite has no universally acknowledged symbols. To propose a symbol for the opposite, we should know what the opposite means. The concept opposite has many meanings depending entirely on the context in which we use it. The term opposite has no general symbol but specific ones according to its use or purpose in different circumstances. However, two opposites cannot have the same meaning, simply two words or things that contradict each other are known as opposites.  Such as Black≠White or 4 = -4, here ≠ tell that two things are not equal or the same and, the – sign states -4 is the opposite of +4. So, we can say specific opposites have opposition symbols but, the general idea for the opposite is vague to have a clear symbol.

Here are some of the examples to explain how the term opposite is dependant on the intended purpose:

All Symbols that can be used for Opposite:

What is a symbol for the opposite in English?

There is no opposite symbol in English. In most cases, the expressions or phrases explain the concept of the opposition rather than a symbol. Words and phrases are the opposite of the representation of ideas in the form of figures or symbols.

Opposition is simply a fact. Hence, it is a neutral quality in mathematics. There is the opposition of moral values: right vs. wrong, good vs. evil, fair, unfair in most philosophy and theology. In Taoism, all opposites are harmonious and in unending cycles of transformation. Day and night, dry and wet, are opposites in harmony. Taoism has a strong influence over zen. Zen Master Thich Nhat Hahn points out that we think the opposite of beautiful to be ugly. E.g., we believe that rose symbolizes beauty, and garbage symbolizes the dirty or ugly. But the matter of composting is true success in life: knowing garbage can be composted to roses and admitting that roses become waste.

So, from the above discussion, it is clear that the opposite symbol term is vague due to various meanings. Hence, it has no general symbolic expression.