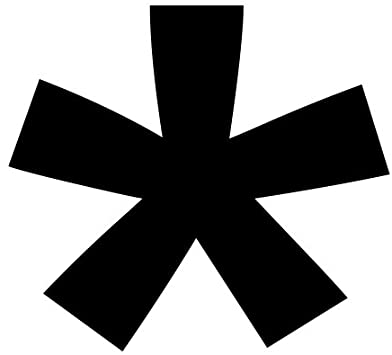 The name of the * symbol is Asterisk. It is a star-shaped symbol that normally represents a footnote, signifies censorship or omission, indicates disclaimers that often appear in advertisements, etc. Some companies also use an asterisk in their logos. Sometimes the symbol is also placed in front of sentences of fragments that are ungrammatical.

The word asterisk has originated from the Greek language. The * name of symbol in the Greek word is asteriskos. But, what does (*) mean in English? It represents a little star. According to the book “Shady Characters: The Secret Life of Punctuation, Symbols, and Other Typographical Marks.” Keith Houston says the asterisk is one of the earliest textual marks. The (*) symbol might be 5,000 years old, which makes it the oldest symbol of punctuation apart from the dagger/ obelisk (†).

According to a book by M.B. Parkes, “Pause and Effect: An Introduction to the History of Punctuation in the West,” this star-shaped symbol has emerged occasionally in early medieval typescripts. Moreover, in printed books, If there was a need to link passages in any text with footnotes or sidenotes, the asterisk and obelus were used in conjunction with other marks. These were referred to as signes de renvoi (signs of referral). After the 16th century, printers started incorporating notes at the page’s bottom. They counted it using the ordered sequence of symbols which was either a dagger or asterisk.

The * name of symbol i.e asterisk also have a few codes, have a look below:

All Symbols that can be used for * Name of Symbol:

Till now we know the * name of symbol. Also, we normally don’t see this kind of symbol in fiction writing. However, it is quite common in non-fiction, especially advertising and marketing. The asterisk symbol has plenty of uses in the English language which are discussed below:

Before the (*) became common in the late 1950s, the dash was used to indicate the censorship of letters from words. But by the middle of the 20th century, asterisks displaced the dash in nearly every use.

Nowadays, slang language has become common, but when one has to tone it down, people normally use the asterisk to replace the letters. For example, the word “backslang” might become “Ba**c*s***g”, or “B**ks*a**g. Most of the time vowels are omitted or censored, but it is not necessary. It is a common practice that uncommon letters or multiple syllables are put in context with the surrounding text. Additionally, if there is any document that comprises confidential information, it is “sanitized” (redacted) and the letters are replaced with asterisks.

In some sports, an asterisk is used and has multiple meanings. In cricket, if a batsman doesn’t lose his wicket, then the total number of runs he has scored will be shown along with an asterisk. For example e.g. “68*” means “68 not out”. Sometimes, it is also used when a batsman is about to face the next ball.

In the majority of sports, an asterisk before a player’s name indicates that the player is the captain of the team. Plus, you’ll see it on screens being used to present career statistics during a match. For example, “50*” in a column of a number of matches means that the current game is the player’s 50th. Apart from cricket, the asterisk has also come into use on baseball scorecards to signify a “great defensive play in recent years.

Sometimes when a writer pens down the words, the context of that particular piece requires an ungrammatical use. However, most of the writers and publishers ensure that the readers know that they have an understanding of English and sentence structure and that they’ve included an ungrammatical phrase or sentence on purpose, for example: *Two scenes are on the wall.

It is obvious that there is a grammatical mistake in the sentence but its meaning is comprehensible. It is okay to add such sentences in quoted texts but, ensure that you use an asterisk as it indicates you realize they contain grammatical errors.

In linguistics, the (*) symbol is placed before a word or phrase that signifies no usage of that specific word/phrase. There are multiple ways to use it depending on the situation. This figure of the star is used in historical linguistics to indicate a hypothetical or reconstructed form that is not previously used in a text or inscription.

The (*) the name of the symbol means a little star and looks quite distinctive. Hence, some companies use an asterisk in their brand names as it looks stylish and want to add such symbols that attract the consumers. However, according to many writers, it is advised that symbols like an asterisk, exclamation marks, or plus signs shouldn’t be used frequently as they can confuse the readers.