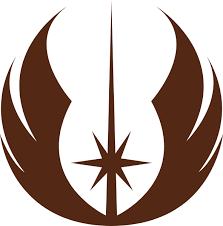 The importance of symbolic reactions on social media is well-known, and the Jedi symbol is that Facebook ancient symbol representing a bird with its broad wings rising in the air. It was usually engraved on a medallion in Old Republic times to honor those heroic personalities who fought for peace and justice.

In the fictional Star Wars Universe, Jedi Insignia is the mark of the Jedi Order. For Star Wars, it stands as a guardian of peace and as a powerful energy that connects the whole universe. It is a sign that had been a ray of hope for people for hundreds of years that gave them the strength to stand against evil when the whole world stepped back in fear.

All Symbols that can be used for Jedi:

The Jedi Order symbol color in animated series is almost always red crest of the wings and lightsaber outlined against a bright white armor background. In addition, the Jedi code was a set of regulations that defined the conduct and behavior of the Jedi Order.

Here are some interesting facts about the Jedi symbol:

1.Jedi armaments had very technological weapons; the most prominent was their lightsabers.

2.This symbol appeared on-screen for the first time in Stars War: The Clone Wars.

3.The consensus is that the wings encircle some glistening star, a star with a single long point that makes it resemble the glow of the famous Jedi weapon, a lightsaber.

5.The Jedi symbol is sometimes mistakenly called the Starbird. It is a symbol of the Rebel Alliance.