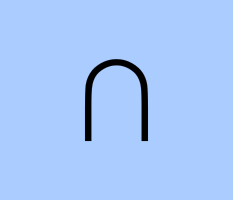 Union Symbol: It is often considered the opposite of Intersection; however, it is not. It is written as A∪B and read as A Union B. The solution set contains all the elements present in both sets A and B. But similar elements are written just once.

All Symbols that can be used for Intersection:

Intersection Symbol LaTeX: to insert an intersection symbol in LaTeX, you have to give the command \cap and take the result.

Intersection Symbol Meaning: It is the same as we discussed above in that it means the Intersection of two sets that possess the common elements.

Complement Symbol: The difference of any given subset with the universal set is the complement set of that particular subset.

Intersection Symbol Copy and Paste: The Intersection symbol is primarily unavailable on any platform, so you have to copy and paste it from here to your chat.

The Intersection Symbol is not readily available on the keyboard or in the symbol section. You have to copy it from here and paste it where required.