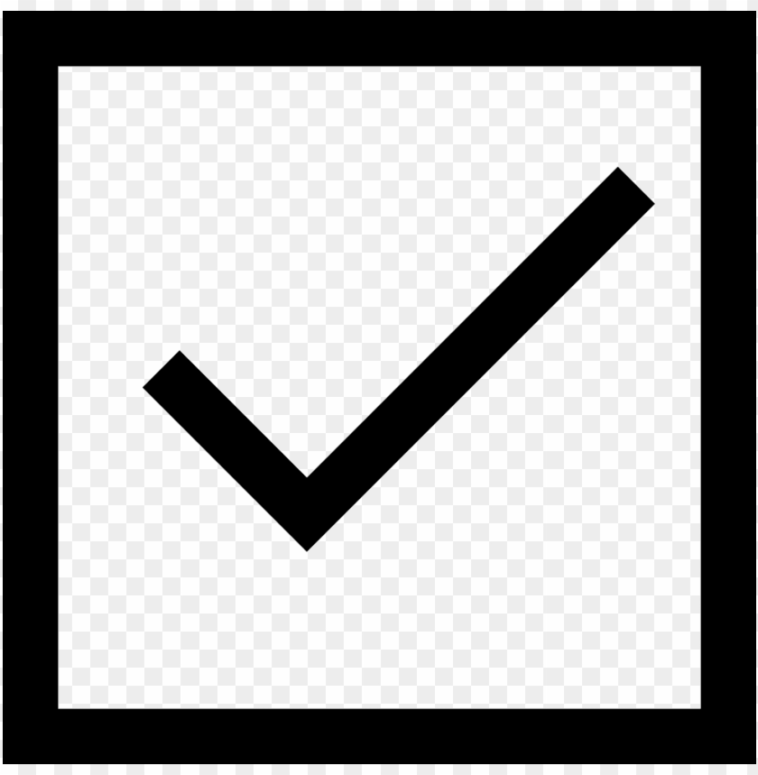 A checkbox symbol or tick box symbol is a tiny interactive box that allows the user to signal an affirmative or negative option by toggling it. It is commonly encountered in HTML input forms, dialogue boxes, and application and operating system GUIs.

When the empty checkbox symbol is clicked, a check mark (✓) appears to signify an affirmative decision (yes). When you click again, the check mark vanishes, suggesting a negative decision (no). Checkboxes are used when more than one option must be checked or to quickly enable or disable a feature in a software application.

Even though there isn’t much history about the empty checkbox sign but the tick mark inside the box dates back to ancient Babylonian tablets, where little deep gouges were often formed with a pen, generally positioned to the left of a worker’s name, probably to indicate whether the indicated ration has been given or not. To check off or tick off as a verb implies making such a mark. Checkboxes are typically square-shaped on printed forms, printed documents, and computer software.

One of the most widely used symbols in forms is the checkbox symbol. The checkbox can have symbols of every colour. They have tick symbols which are black, tick emojis which are green check marks, the grey checkmark ballot box, and red cross emojis. The checkbox emoji that is green in colour denotes verified emoji in social accounts that shows a public person or celebrity account has been verified.

All Symbols that can be used for Checkbox:

How to Add an X Mark in The Checkbox Symbol?

An X mark symbol represents the notion of negation as well as an indication. Its exact opposite is frequently thought to be the check mark or tick (or the O mark used in Japan and Korea). The X mark (❌) is known as “batsu” in Japanese and may be portrayed by crossing one’s arms.

After inserting a checkbox in a text, you can edit the checkbox symbol from an X to a checkmark or another symbol, or make additional adjustments, such as changing the checkbox’s colour or size.
Here’s how it’s done:

How To Type Check Mark Symbol on Keyboard?

There are four ways to put a tick mark in Microsoft Word. The Alt X and Alt Code methods, in particular, need memorising a 4-5 digit code. The Insert Symbol and Autocorrect methods, on the other hand, are simple and easy to memorise. The Autocorrect approach is the smartest way to place a tick sign or check in a box since it is the quickest and easiest to memorise.

One advantage of using a program like Word is that you can add more than just letters to your text, you aren’t limited to what you can enter. You may put symbols and special characters into your work in addition to photos and shapes.
Since it is the most efficient way, it is most commonly used to add any symbol including checkbox in documents. All you need to do is:

To generate the special characters, these codes are often input onto a keypad together with the Alt key. Because keyboards have limited space, Alt codes allow you to create characters and symbols that don’t currently have dedicated keys.

By using the Alt code method you’ll be able to type a square to put a square character into a document or Web page without having to draw it in another software. Alt codes are programming codes that allow you to create foreign language letters, money symbols, and even geometric objects like squares on your computer by utilizing a combination of numbers and the alt key. There are alternative codes for various distinct sorts of square forms.

This way is the fastest yet the smartest way to get the desired symbol in your documents.As this is a shortcut it is easy to remember as well. Here is how you can achieve it:

Alt+X is a keyboard shortcut that is commonly used to display a character’s Unicode character code. This is another fast way but requires memorizing the codes. To use the Alt X keyboard shortcut click and hold either Alt key, then press X while still holding.