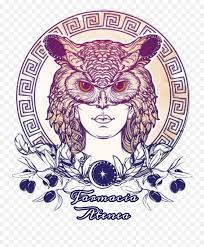 Athena Facts: Athena’s symbols and meanings resemble the birds, especially the owl. The word “Athena” is associated with the name of the state of Greek Civilization, Athens. Primarily Athena was the contemporary goddess of wisdom.

Athena Roman Name: Roman people have different beliefs and named the Athena. In the Roman language, Athena is named “Minerva.” They consider her the goddess of multiple things, like the goddess of professions, craftworks, and arts. They also give thought to her as the goddess of war.

All Symbols that can be used for Athena:

Athena Powers: As a goddess of wisdom, Athena used to have a lot of powers. She was an inventor of many things. Her inventions include a rake, chariot, the plow, and the ship. It is also regarded as her power that she developed pottery and weaving skills by herself and taught them to the women of that era.

Athena Symbol Tattoo: As Athena is associated with bravery, wisdom, courage, and innovation, people used to cast her tattoos on their bodies in the sense that it would give them wisdom and courage too. The main symbols of Athena include olive, owl, the Gorgoneion, and snakes. The tattoo which resembles her picture is a woman wearing a helmet and a sparrow sitting on her shoulder.

Athena Personality: As far as Athena’s personality is concerned, she had a binary one. While she was strong, courageous, and innovative, on the other hand, she had a feminine aesthetic.

Athena Parents: Athena was the daughter of Zeus, the god of sky and weather. The case of the mother is controversial. Some say she was produced without a mother, while others say that Zeus ate Metis, who was pregnant at that time, and then Zeus gave birth to Athena.

You may not find Athena symbols on the platform you use for conversation. Copy these symbols from here and paste them into your chat to show enthusiasm.