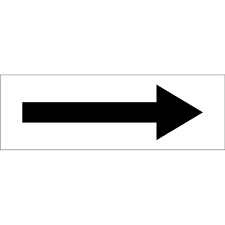 The arrow evolved a powerful and distinct symbolic life from the bow hundreds of years ago. It was a crucial aspect of communication since it was one of the first pieces of technology and one of the easiest to grasp.The first arrows are thought to have been discovered in South Africa over 70,000 years ago, and they first surfaced in Eurasia 48,000 years ago. They were largely utilised as weapons in ancient societies, either to hunt animals or to protect people from opposing clans. Illustrations of fighters armed with bows and arrows can be seen in early cave art and texts.

An arrow in two dimensions features a pointy end and a fletched end, suggesting movement. It has been used as a navigational sign for centuries. They are a vital aspect of the scenery on road and path signposts in the current metropolitan environment. Every day, millions of individuals go around the world without stopping to consider that they are being led by an arrow. There is no better method to represent the principles of up, down, left, right, forward, or back than with an arrow symbol on your work keyboard or any other scenario.

All Symbols that can be used for arrow:

Different Types of Arrow Symbols and Their Meanings

If we look attentively, we can see the arrow symbol everywhere. People pay little attention to their meaning and importance since they are seen so frequently. Surprisingly, even the most basic arrow designs carry a symbolic value and are copied from ancient societies.

➹This is symbol is an illustration of an arrow ready to be released from a bow. This symbol indicates progress and shows that the individual is prepared to embark on new experiences and dreams. As the arrow remains tied to the bow, there is also anticipation and wonder about what the future journey may offer.

2.An Arrow in Motion

⭯ This symbol has a shape of an arrow but in a circle.It appears to be moving. It represents energy and vitality. There is action and effort to reach one’s objectives and aims.

3.A Loop in an Arrow

↬ It is an image of an arrow with a loop in the centre. This sort of arrow represents success over difficulties, troubles, and conflicts. It is up to us to have the determination and fortitude to overcome obstacles and achieve our goals. The arrow smoothes out at the other end, implying that everything is possible.

⤧ Two arrows cross each other in this symbol. The arrows’ position and various design features can also alter their meaning. Two crossed arrows are a powerful sign of friendship.

Meanings of Arrows in Different Religions

Arrows and quivers are mentioned about 60 times in the Bible, often as metaphors.

In Jewish symbolism, King Jehoash, at the instruction of the prophet Elisha, discharged arrows into the air from an open window to symbolise the destruction of his rivals. On Lag Baomer, the Jewish mid-year holiday, children are sent to play with bows and arrows, with the bow representing a rainbow and the arrow representing the mystical  tradition of ‘strength of inner life.’

Most hotel rooms in the Middle East and Asia have figurative ‘qibla’ arrows on the ceiling, pointing anybody who needs to pray toward Mecca.

The Number of Arrows and Their Meanings

The significance of arrow tattoos varies depending on the number of arrows in the symbolic representation. Let’s look at what they mean:

Crossed arrows are a symbol of friendship. But what does it indicate when two arrows are pointing in opposite directions? It represents confrontation and battle, which is the polar opposite of the former definition.

The three arrows have been utilised throughout history, particularly by left-wing groups and socialists. During the French Nazi occupation, it was also a sign of resistance and was recognised as a Republican emblem. The most prevalent interpretation is that each arrow represents one of three concepts; liberty, equality, or justice.

How To Type Arrow Symbol In Word?

When creating documents in Word, we may usually apply visual symbols, such as arrows of various forms and directions, to make the content more logical and vibrant. Because they cannot be written directly like letters and numbers, here are three techniques for inserting the arrow symbols using the keyboard.

Other than the representation of arrow symbols with simple lines, the Unicode system contains a plethora of artistic arrow emojis. You can insert them using alt codes.