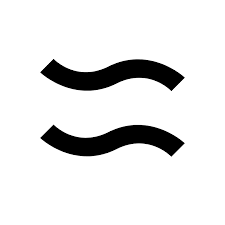 The word approximation is derived from the Latin word “approximatus”, and this further comes from “Proximus” which means words like approximate, approximately, or approximation. These words are used especially in mathematics or scientific studies. The word is typically abbreviated as approx and in daily language, words such as “roughly” or “around” are used as they have similar meanings.

Like most of the Latin and Greek words, there is also a symbol for approximation. The sign is used to denote almost equal items. The approximately equal symbol is either “curvy” or has dots over the “equals” sign.

Another symbol used for approximation looks like a small wave and is called a tilde ( ~ ) Instead of the actual approximate symbol it is inserted to represent the “approximately equal to”. However, the almost equal sign ( ≈) is most widely used in texts.

Below are the Unicode of the approximately symbol

How To Type Approximately Symbol in Word/ Excel

All Symbols that can be used for approximately:

If you wish to enter the text as HTML, the following notations are helpful:

For the approximate symbols, the keyboard does not have a specific key. However, if you have Windows installed on your PC, it will be easy to find and type this sign using the “Alt Numpad” input method, which is called the” Alt code method”. To put in the alt code approximate symbol, all you need to do is press and hold the Alt key and type the number 247. This method will allow you to find the approximately math symbol on the numeric keypad.

As the Operating system is changed for Mac, the instructions are different too. To type in the approx. The symbol you need to use is the keyboard shortcut “Option + X”. Firstly, put the pointer where you need this symbol. Secondly, press and hold the Option key and simultaneously press the X key once on the keyboard.

The copy and paste method is the easiest way to insert any approximation sign. This way works accurately for every MS Office application like Word, Excel, or PowerPoint. All it takes is to copy the symbol from any source like a character map for windows users or any webpage. Just select the symbol and click Ctrl+C to copy. The next step is to place the pointer where you need the symbol and press Ctrl+V to paste.

Another way to get the Approximately Equal Symbol is by using the AutoCorrect feature in Word. This feature in MS Word helps to correct spelling mistakes but it also helps with putting the approx symbols.

It lets the individuals assign their shortcuts to symbols so that they can easily type them regularly in their documents. For the Approximately Equal sign, one can allocate a shortcode like “APPROX=”  for the symbol. In this way whenever you type the word “APPROX=”, Word will take it as a mistake and change it into the symbol ≈ automatically.

The last way is to use the symbol dialogue box where there are tons of symbols, from there you can search for the approximate sign and add it with just a few mouse clicks. You can find the symbol box after you click the Insert tab, select Mathematical Operators to display symbols from the category where there is an “Approximately Equal sign”. Double click on the symbol and insert it wherever you want it in your document.

Where Do We Use the Approximately Symbol?

There are various properties on which we use this term as well as the symbol for approximation i.e that is nearly, but not exactly correct; similar, but not exactly the same These include value, quantity, image, description, etc. Most of the time approximation is used in number problems, such as mathematical equations or physical laws.

In science, approximation means adopting a simpler model when the real model is difficult to use. Such models are used to make calculations hassle-free. The approximately equal sign and the model of approximations are also helpful if there is incomplete information that prevents the use of exact representations.